What a Rock Band Can Teach Us about Presenting 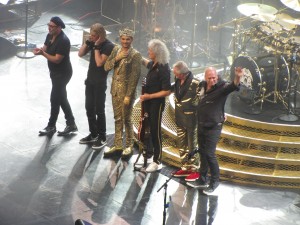 Considered by many to be the greatest British band in history, the former rock group Queen easily sold out just about any stadium they played in. In a 2003 interview, band members Brian May and Roger Taylor talked about the structure of their concerts.

“We were very aware as entertainers that the shape of the show is vitally important. A lot of people have no concept of this. But you can’t just put songs together willy nilly and expect the whole thing to work. You have to have a shape to maximize your impact.”

“Basically blind and deafen them [the audience] in the first ten minutes, and while they’re recovering from that, do a few things [songs] that people recognize. Then take it down; do something slow that takes a little more thought and then gradually build to the next climax.”

“But basically the beginning and end of the show is vital and we were very aware of that.”

The shape of a business presentation is no less important than the shape of any concert. And while we are not suggesting that you “blind and deafen” your audience, we are saying that the beginning of your presentation is especially important. There’s only one part of a presentation that you are guaranteed audience attention – the opening. But most audiences will give you only about one minute to prove you have something important or interesting to say. If you don’t grab them at the onset, you could lose them – for the rest of your remarks.

We think there are two approaches to the beginning of a presentation – traditional and non-traditional. Regardless of the approach you choose, the opening should not be long-winded. Keep it short – no more than about ten percent of your total presentation length.

In the traditional approach, the speaker usually greets the audience, introduces himself, and identifies the topic of the presentation and the agenda or specific sub-topics he plans to cover. This is probably the most frequently used opening. And there’s nothing inherently wrong with it (other than its predictability) – especially if it’s delivered powerfully.

Then there’s the non-traditional opening. In this approach, the speaker may begin with something unexpected – a story or compelling statistic, for example. The audience is intrigued, and for a few moments, wonders where the speaker is headed. Then the speaker may introduce herself and identify the topic and purpose of the presentation before continuing.

There are many non-traditional ways to begin a presentation: a story, an analogy, a memorable quote, compelling data, a question (including rhetorical) – to name a few.

If you were delivering a speech or presentation about the power of sacrifice, here’s a story that would make for a powerful opening:

Two brothers, Albrecht and Albert, grew up in Nuremberg, Germany in the 1400s wanting to be artists. But their parents could not afford to have both of them study art. Albert, who recognized his brother’s incredible talent, told Albrecht to study art, and said he’d work in the mines to pay for the studies.

Eventually, Albrecht became an accomplished artist, working and recognized throughout Europe. When he returned to Germany, he thanked his brother and said that he would now work in the mines so that Albert could study art.

Albert thanked him, but showed his hands, which were badly bruised. There was no way he could even hold a pencil or a paintbrush.

So Albrecht continued his successful career. And created his most famous piece of art – a sketch of two hands clasped in prayer. Most likely, you’ve seen the sketch. It’s Albrecht Durer’s Praying Hands. And it was drawn to honor his brother’s unselfish sacrifice.

Every Queen concert began with a song that immediately brought the audience to its feet.

Don’t squander your opening on the ordinary or mundane.