I Could Have Said It Better Myself 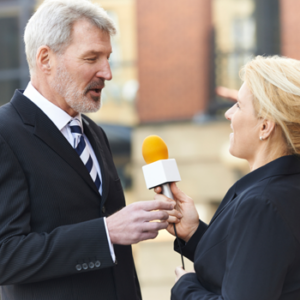 John Oliver is a British-American comedian best known in the United States for hosting HBO’s Last Week Tonight, a weekly news satire program. In one episode, he poked fun at the popular TV news magazine 60 Minutes, suggesting that the show’s correspondents put words into their interview subjects’ mouths. During his broadcast, Oliver showed a compilation of 60 Minutes interviewees repeating back comments from the interviewers.

Watching a reporter put words in someone’s mouth can be funny (http://mediaite.com/tv/john-oliver-identifies-everything-thats-wrong-with-60-minutes/) – unless you happen to be the someone being programmed.

So, why do reporters do this? For a number of reasons: One is to get a juicy soundbite. Remember, journalism today is a business. There’s a lot of competition out there, and one way news outlets outmaneuver their competitors is with a startling headline or a snappy quote. If you don’t provide something attention-getting on your own, the reporter is happy to serve as your proxy.

Another reason is that part of a reporter’s job is to help you tell your story or explain your topic. One way to do that is not just by asking questions, but also by participating in the discussion. In other words, the reporter’s enthusiasm for your topic or desire for clarity can lead him or her to offer ideas.

What can you do to avoid parroting the reporter’s words?

▪ First off, be aware that it happens. We suspect that most people don’t even know if they’re doing it. If you’ve done some broadcast interviews in the past, review a few of them. Also, before sitting down with a reporter, if possible, watch a few of the reporter’s past interviews. Some years ago, we coached a client who was going to be interviewed by Lesley Stahl on 60 Minutes. (Stahl is one of the correspondents who appears on John Oliver’s compilation.) The client had never seen Stahl on 60 Minutes and was unfamiliar with her interview style. Our coaching session included examining some of the predictable techniques Stahl uses. In short, do some due diligence.

▪ Go to every interview with an agenda – some key points you want to make. If you operate primarily in a “reactive” mode (simply answering questions the reporter asks), you’re more likely to regurgitate what you’re fed.

▪ Bolster your key points with what we call “sparklers” – analogies, stories, examples, illustrations, anecdotes, compelling data and memorable or quotable lines. Reporters are hard-wired to hear and react favorably to sparklers.

▪ Make your agenda dominate. In other words, don’t be afraid to talk. We tell clients that in an interview, they are the “content experts.” They know more about the topic than the reporter does. This means they, not the reporter, should be doing most of the talking. How much? About 80-85 percent of the interview is theirs; the reporter gets 15-20 percent. Good reporters will give you the “floor” if you have something important and interesting to say. If not, they will cover for you by prompting you with their words and ideas.

▪ Listen, think and respond – in that order. When you’re asked a question, listen to it carefully. Think about it (5-10 seconds is perfectly fine). And then respond. Although the brief pause may seem uncomfortable to you, the good news is that the reporter and the audience will see you as thoughtful. And thoughtful people pause before responding. Getting comfortable with silence will make you less likely to feel the need to respond instantly – perhaps repeating the reporter’s words.

Here are two responses to a hypothetical reporter’s question following a fatal accident:

Question:   “Is this the worst day in your company’s history?”

Answer #2:   “What happened today was a real tragedy, and all of our employees are saddened by it.”

Which answer do you think is more likely when using the listen – think – respond technique?

Talking to reporters can be tough. You’re up against people who talk for a living – and do it every day. But with a bit of awareness, control and assertiveness, you can keep them from putting words into your mouth.