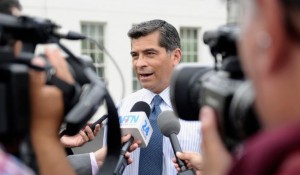 A funny thing happened recently during one of our media training workshops.

First, some background: When a client participates in one of our crisis press briefing simulations, occasionally we’ll pose a question or two in Spanish. We do this in locations with a significant Hispanic population, and to sensitize clients to the growing presence of the Hispanic news media (Telemundo, Univision, etc.).

Now the humor: During one of these simulations, one of our instructors (who happens to be a native Spanish speaker), surprised the client with a question in Spanish. The client, who spoke no Spanish, was so taken aback the only response he could muster was, “Could you repeat the question?” Naturally, the instructor obliged, and repeated the question – in Spanish!

Needless to say, everyone enjoyed a good laugh during the critique.

We tell this story to drive home a very important point: During a crisis (or a news event of any kind), you may face a Spanish-speaking reporter.

A few things to keep in mind:

▪ First of all, be aware that the Hispanic media may be present at your press briefing or news conference. And by the way, you don’t have to live in Texas, California or Arizona to encounter a Spanish-speaking journalist.

▪ Treat the Hispanic media with respect. Of course these reporters speak English as well, but remember they’re asking their questions in Spanish and hoping to get a response in Spanish for their viewers or listeners who don’t speak English or prefer to get their news in Spanish.

▪ Determine if there’s a professional in your organization who’s fluent in Spanish and can interact successfully with the news media. Have that person present at your media event. Don’t marginalize the Hispanic media by having an unqualified, low-level individual talk to them just because that person speaks Spanish. (Believe it or not, some companies have done this!)

▪ If you cannot respond immediately in Spanish, tell the reporters you will make arrangements to accommodate them (if that’s possible). Otherwise, simply and politely indicate that you’re unable to do the interview in Spanish.

▪ In your emergency management plan, identify resources that can provide you with a Spanish speaker and perhaps help in establishing a Spanish-language emergency hotline.

▪ In certain cities (Los Angeles, San Antonio, to name a few), it’s a foregone conclusion that you’ll encounter an Hispanic reporter. And with the Hispanic population growing nationwide, more cities are being added to that list. If your goal is to reach and relate to this important demographic, now is the time to ensure that your organization has the language skills to do that.