A Lesson from Boston 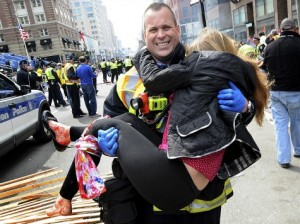 Within an hour after two bombs exploded at the Boston Marathon, the Boston Police Department set up a command post in the ballroom of the Westin Copley Place Hotel. During that first hour, the number of people stationed in that center expanded from 12 to 100. Ultimately, some 1,000 local, state and federal authorities, including the mayor and governor, were based there.

According to Boston Police Commissioner Ed Davis, law enforcement quickly realized that they needed a place near the bombing site where a large number of investigators could collaborate, bring in computers, review video and process the evidence (e.g., bomb parts, etc.) that was cascading in. (Authorities also obtained a warehouse where evidence could be examined and stored.) Media briefings were also conducted from the hotel.

Preparing for a crisis involves many things. One of them is having a place where a crisis management team or members of an incident command structure can meet and work.

Every organization (indeed, every location of every organization) should identify an on-site space where its team can meet. In the past, some companies installed sophisticated emergency operations centers (sometimes called “war rooms”). These were dedicated rooms, used only during crises, and equipped with the latest technology, including teleconferencing capabilities (e.g., enabling headquarters to communicate visually with its locations), electronic “white boards,” multiple television monitors (to monitor news coverage), etc.

Often, these dedicated rooms required quite an investment, and some companies still have them. (One of our clients – a nuclear utility – has a center that includes a large auditorium it can use for news conferences and public meetings.)

Today, it’s more common for a company to designate a conference room that can quickly be transformed into a temporary crisis management center. These rooms generally work fine, as long as they are adequately sized, configured and equipped.

In one of the crisis drills we helped conduct, the client used a conference room that was far too small for the assembled team. Chairs and table space were at a premium, and at times, the room got very noisy as people held phone and face-to-face conversations – including when the team leader or other team members were briefing the entire team. At one point, someone had to call for quiet. Electrical outlets were in short supply, and some people had to rely on battery power for their computers.  Even coffee and other refreshments had to be placed outside the room; this increased the chances that when people briefly left the room, they might miss something important.

As the situation in Boston illustrates, it’s critical to have access to an alternate, off-site crisis center location. This is especially important when events such as fires, explosions and hostage situations prevent you from using your own facility as a staging area. A good strategy is to scope out possible alternate locations. Hotels, schools, churches, community centers and similar facilities are usually good candidates. Visit these facilities before any crisis and add them to your list of possible venues.

Regardless of where your crisis center is, develop a checklist of the equipment and supplies that will be needed. Think big (e.g., Internet access, printers, copy machines, phone lines, etc.) and small (e.g., note pads, pens, flip charts, etc.).

A new approach in crisis management has crisis management team members in a virtual crisis management center. This allows team members to assemble in minutes because they are able to gather via the Internet – a major advantage when responders are in far-flung locations that may not allow them to gather for hours or days. If your company has not considered such an approach, now might be the time to explore this technology and test it during one of your drills.