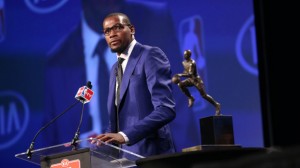 Several months back, Kevin Durant delivered a moving, gratitude-filled MVP speech that generated quite a buzz. Even those who don’t follow professional basketball were talking about the speech.

For those of you who are basketball challenged, Durant is the highly regarded forward with the Oklahoma City Thunder. In May, he was named league MVP for the 2013-14 season.

Given that the speech created nearly as much interest as the accomplishments that led to it, we decided to analyze it – much as we do when we critique our clients’ speeches and presentations in our workshops and coaching sessions.

There’s much to like about the speech. First off, it was heartfelt. Durant was clearly humbled by the honor he received and struggled to fight back tears as he talked about the people who believed in and influenced him. (Speaking of tears, if you watch the speech, you too might have to fight back a few.)

Content is king, and to some extent, Durant nailed it. He recognized that he had an opportunity to focus not on himself, but on others. And that’s just what he did. Rather than speak in generalities, he mentioned nearly 25 people by name. Many of them were in the audience, and he addressed them directly – mentioning something touching or humorous about them. For example, he told one of his teammates how much he appreciated the man’s simple gesture of slipping a piece of paper into his locker – well before it was determined who the MVP would be. The message said, “KD:MVP.”

His most touching and powerful remarks were about his mother, a single parent who raised him and his brothers. He recalled memories of the family’s first apartment – with not a single piece of furniture, times when his mother would go hungry so that her sons could eat, and his mother’s constant encouragement, motivating him to succeed. When he told her, “You’re the real MVP,” the audience stood and applauded.

Another positive aspect of the speech was that it sounded less like a speech and more like a conversation. Durant used “language of the living room” – no “fifty dollar words,” along with some incomplete sentences. In short, it was not a highly polished, formal communication written by his agent, but a plain-spoken reflection of his thoughts.

Now, the problems with the speech – and some lessons for all of us:

Length: It was too long – nearly 26 minutes! (FYI, one of the greatest speeches ever given was Lincoln’s Gettysburg Address, and it was delivered in just over two minutes.) What’s more, at about the 15-minute mark, Durant said, “I’m about done; give me a couple more minutes.” Ten minutes later he was still talking. Durant’s entire speech should have and could have been delivered in 5 minutes – ten minutes max.

Audiences rarely or never say, “I wish that presentation had been a bit longer.” The more you say, the less they remember. Value brevity.

Opening: Durant’s was weak. He began by saying, “I’m usually good at talking, but I’m a little nervous today.” While that honesty might have endeared him to some, it’s usually counterproductive. When you announce that you are nervous, the audience begins to worry about you. People who cause worry don’t inspire confidence.

A better opening would have been one of the many emotional stories Durant had about his career, his teammates or his life.

Content: Despite some solid content, the speech could have been improved. For example, we liked how Durant personalized it, but when you mention some 25 people by name, that gets tedious – especially when you express the same sentiment for some of the individuals. A better strategy would have been to be more selective about whom you recognize, and then say something different and succinct about each person.

Ending: The speech ended poorly. At the 25-minute mark, the audience was probably fatigued and wondering how much longer Durant was going to talk. However, some were probably anticipating powerful concluding remarks. None came. Also, ending on a powerful note would have counteracted some of the tedium caused by length. (The principle of recency states that audiences remember what they heard last in a presentation more vividly than what they heard earlier in the presentation.)

Durant should have ended on an emotional note – a story, a statement or a line – something inspirational that tied into his key message (i.e., gratitude). Crafting a powerful ending is a challenging task, but it’s worth the effort. Avoid endings that fade or fizzle out – as Durant’s did.

Notes: If was tough to tell if Durant used any notes. He didn’t approach the lectern with any, and it wasn’t clear whether any notes were already at the lectern. We suspect not. This may explain why his speech was too long and he seemed to ramble.

Notes give you a road map which keeps you on the straight and narrow. They can help you avoid  meandering  or repeating yourself.

Practice: We see no evidence that Durant practiced his speech. Undoubtedly, he thought about what he wanted to say. And he may even have scripted it out. But it’s doubtful he practiced the delivery.

Rule of thumb: Practice your presentation three times, aloud, into a recording device (preferably, video). Then play it back and critique it.

This year, we’ll pass on giving Kevin our MVP Award (Most Valuable Presenter). But there’s always next year. Like basketball, public speaking is a skill – something that can be learned, practiced and improved with hard work.